Excursions with MAYPE our 18 meter yacht 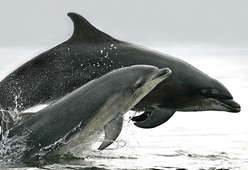 The Canary Islands are located in the subtropical region of West Africa, are of volcanic origin (with great depths a short distance from the coast) and thanks to its oceanic position, they present peculiar oceanographic and geomorphological features that allow the existence of species warm and tropical fauna with elements of temperate or cold waters. The islands mark the southern limit of distribution for cold-water species, and the northern limit for species of tropical waters. So far, although there are unconfirmed sightings of three other species, at least 29 cetacean species, belonging to 8 families have been identified in this water. This set of species puts the Canary Islands as one of the places in the world with greater diversity of cetaceans, and the largest in Europe. 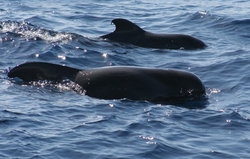 Why we find these stable colonies of cetaceans throughout the year in our waters, is mainly due to three factors:

The average water temperature varies between 18 ºC and 20 ºC.

All these factors make these waters, rich in organic matter, especially in fish and squid and other cephalopods, also specimens of giant squid can be found , which is the favorite food of the sperm whale ( Physeter macrocephalus ) . The abundance of food in addition to the previously mentioned factors encourage the Pilot or Tropical Calderón ( Globicephala macrorhynchus ) and the bottlenose dolphin (Tursiops Trucatus ). Whales are animals that live in our waters throughout the year and for many years. Besides these two species commonly seen in these waters, we can quite often also spot: 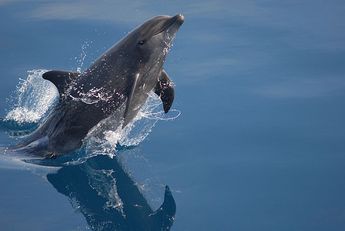 DOLFIN MULAR
Size: The average adult size is 2.7 m for males and from 2.5 to 2,6 m in females. Copies of major age beyond 3 meters, with a maximum recorded in Canary 3.4 m, can live 30 years and weigh more than 500 kg.
Sightings: The bottlenose dolphin is a common species in the archipelago to be found relatively close to the coast , particularly in the southwest of Lanzarote can be seen less than 2 miles from the coast throughout the year .
In spring and especially in summer the population is augmented with the arrival of other groups. The waters southwest of Lanzarote appear to be one of the largest breeding ground of this species in Europe. 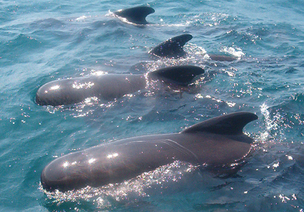 CALDERÓN TROPICAL
Pilot Whale, also called Globicéfalo or Calderon. They can live between 30 and 50 and weigh an average of 3 tons. They are found in groups of 5-50 individuals. It is a common species in the archipelago to be found relatively close to the coast and specifically in southwest Lanzarote, you can see them less than 2 miles from the coast throughout the year.

​BOOK NOW ON  LINE  AND RECIEVE ALL DRINKS FREE!